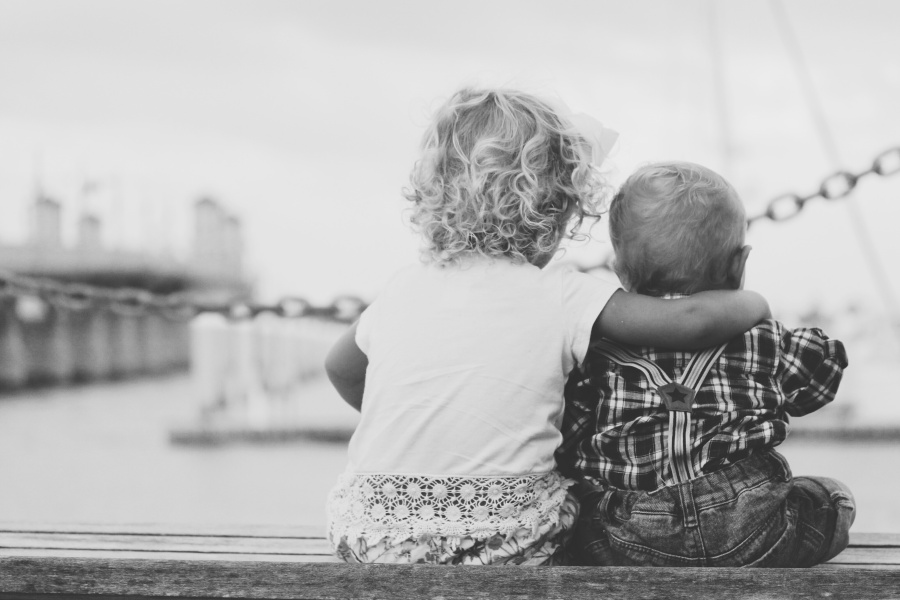 A few weeks ago my family took a late afternoon trip to Costco.  Shopping at Costco is a lot of work, and everyone ends up hungry by trip’s end, especially the 3 and 4 year old.  So after filling our cart with comically sized food items we proceeded to the concessions area to purchase comically large slices of pizza for comically small amounts of money.  I, trying to eat less carbs in an attempt to return to the not-yet-too-chunky glory days of my early 30’s, passed on pizza for myself.  Which is all to say that what followed may have been tinged with a bit of low blood sugar induced irritation.

At that moment the vending machine was being abused by a little horde of children who kept obsessively checking the nook where change gets returned with that sort of indifference to reality that occurs in people who keep opening the fridge again and again, expecting that somehow the next result may be different.  As we approached I’d expected them to part as though I were Moses and my kids were God’s chosen people.  But no, instead they just doubled down on their faux consumer play as my kids stood behind them and watched.

One mother, who I’d originally assumed to be the caretaker of the whole brood, numbering four or so at this point, asked them to politely make room for people who were going to buy water.  Two of the children, who turned out to be hers, stood a bit to the side.  But a young boy and an even younger girl made no such gestures and instead continued their irrational ritual of pawing at the machine as though it might just magically bestow water on them for no reason at all.

I waited awkwardly for a minute, hoping that someone would come along to claim the boy and the girl.  I imagined their mother or father rushing up to us and squatting down to look this boy in the eyes, telling him “Johnny, this nice man and his adorable two kids have actual monies that they are hoping to put in this vending machine in exchange for goods and services in the form of water.  And so as good citizens of capitalism we should just stand aside for a moment and let them do their part to keep America great.”  Then I’d smile and nod to her, and I’d want to say something like “Thanks, it sure is a lot of work keeping tabs on these little ones, isn’t it?” – but I wouldn’t, because for parents like us this sort of thing goes without saying.

At the end of that minute, though, no one had come forth to claim the kids.  So I did my best to sort of weasel myself and my two kids closer to the machine and made a clear show of the quarters we’d brought along just so they’d know we were serious.  My daughter took her quarter and slipped it in the machine, at which point the young boy immediately tried to press that long awkward button that returns your money.  A few moments later, his attempts at sabotaging our purchase having failed, my daughter started to punch in the number and letter for a particular bottle (A 11), although given that the machine was filled with identical bottles of water the difference between A11 and say C8 was effectively zero.  Still, it was part of the experience and when the young boy began mashing buttons of his own I felt he’d taken this charade too far.

Ok, ok, you’ve had your fun, I thought as the bottle fell into, then was guided along by, that tiny elevator that conveys each bottle to its final destination, a small vestibule that could be accessed using a clear sliding door.  But as my daughter stepped forward to open the door and get the water the little boy boxed her out and reached in to grab it for himself.  I let out a light chuckle and shooed his hand away so my daughter could reap the fruits of her labor.  All the while I was thinking, just who the hell do these kids belong to and at what point are they going to step in and make this madness stop?

After a similar dance in which I pretended to be amused and totally fine with these two little strangers’ shenanigans we finally got a second bottle for my son.  As we turned to walk back to our table the young boy held out his hand and asked if I could give him a quarter.  I know I was supposed to be thinking, oh buddy if I had one I’d surely give it to you, but all I could think at that moment was, just who the hell do you think you are?  Sure, that’s an awful thing to think about a child, and of course I didn’t say that, instead I mumbled something about being out of quarters as I ushered my children towards a safer space.  Don’t look back, I thought.  Just keep moving.   I knew the longer we lingered the more likely he’d be to ask for something else, maybe a puppy or a contribution towards his 529 college plan, at which point I’d say something that would make me the asshole.

Last year sometime I was at a cookout with some friends, as well as various strangers and some of their kids as well.  A good friend, who himself had no children, confided in me that one of the kids running around was a bit irritating.  He said it with a slight hint of embarrassment, as though he might be broaching a taboo in telling this to someone with kids.  “Oh yeah,” I assured him, “that kid is obnoxious.”  Then I shared with him a dirty little secret: “As a rule, I’m generally not crazy about other people’s kids.”

Now I should clarify.  I love my own kids.  I’d set the world on fire to keep them safe and happy.  Then there are other kids, like my nieces who I love and adore.  There are also kids of friends and neighbors who I’m also quite fond of.

But all those other kids?  The typical, run-of-the-mill child I encounter at the mall, or Denny’s or even at a friend’s cookout?  I admit to having a hard time dealing with some of them.  It’s not really their fault, they are just kids and I’m supposed to be the more rational one.  Sometimes, though, it’s just not that easy.

My biggest problem with other people’s kids, the ones I haven’t already taken a shining to, is that kids really stress me out.  Especially when you get a few of them together in a group.  Take, for example, those little play-places in the mall.  I loathe those places.  I can’t stand watching all those kids (even mine at times) being so blatantly rude and indifferent to each other as they go the wrong way up slides and knock one another off an oversized plastic mushroom without a touch of remorse.  I know they see it as playing, but I don’t.  I see it as a step removed from a gladiator ring for children.

And what to do when some anonymous child is driving you crazy?  If another adult is doing something obnoxious, like say willfully standing between my daughter and her recently purchased bottle of water, I’ll have no problem asking them to kindly get the hell out of the way.  But replace that adult with a kid and my power is gone.  Because as much as they irritate me, at bottom, they are just kids.  I didn’t really hate those children at the vending machine, or even dislike them.  I just hated being in a situation where I was powerless to do much because I don’t know how to manage some stranger’s kids.  It’s the same reason I’m a big believer in dogs always being on leashes.  I have nothing against dogs but if your dog comes running up to me and humping my leg or whatever what am I supposed to do?  Let’s just keep them on a leash and avoid that situation entirely, ok?

I guess it isn’t really the kids that irritate me so much.  It’s the parents.  The one’s who let their kids off leash without watching where they’ve gone off to and whether they might be pissing in someone’s yard.  If you are going to let them roam free at least teach them a little common courtesy.  And if they aren’t courteous then be prepared to step in on my behalf when your daughter starts trying to step on my feet for no apparent reason.  I’m sure she’s a doll, but would you minding coming over to get her?  I’d pick her up myself but what if she bites me?  That’s a liability neither of us wants to deal with.

I eventually identified the mother of that young boy.  It appears that she’d been sitting a few tables away the whole time, watching things unfold, a phone in her hand and a smile on her face.  I tried to give her the benefit of the doubt, maybe she’s a widow, I told myself, but then her big equally naive husband came along with the cart and they sat there chatting and smiling and seemingly oblivious to the fact that their kids were ruining a little bit of America for the rest of us.

I try my best to give other people the benefit of the doubt.  Which is not to say that I don’t have many moments myself where I’m cursing some other driver under my breath, or snapping at my wife because she’s asked me “what are you reading on your phone?” but all I’ve heard was “you are a terrible husband and father, willing to just throw your attention at any yahoo news alert that comes along rather than sit here and be present with our children and me, your wife, so don’t be surprised when you look up from your phone one day and discover that you are alone in this world.”  Still, I like to think of myself as someone who, after cooling down from my evolutionarily tuned response, can admit that getting so worked up or mad at someone else isn’t really helpful.  They are doing the best they can.  Aren’t we all?

But for some reason that day in Costco I couldn’t get to the point where I believed that was true.  Not for this lady, she was not trying her best.  At least not at that moment.

Do I really dislike other people’s kids?  Nah.  Sometimes, especially when they drastically outnumber me, I admit to being a little uncomfortable.  At the end of the day, though, kids are kids, and hey, they say and do the darndest things.  But their parents…with their stupid grins and their what are you gonna do attitudes?  Maybe I’m just not that crazy about other parents.  Or at least, certain other parents who shall go unnamed if only because I never caught hers.

If you enjoyed this post PLEASE consider scrolling down below to the ‘Follow This Blog’ box and enter your email to receive alerts when new posts come online.  And feel free to share on facebook, but not if you think you might be friends with the Costco mom because then I’d just feel bad.